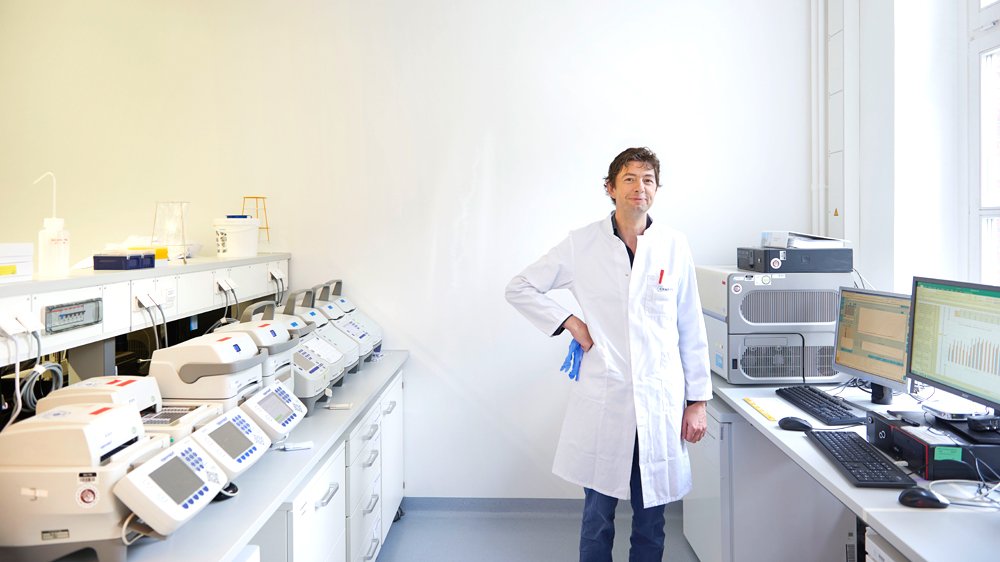 Professor Christian Drosten, Head of the Institute for Virology at the Charité – Universitätsmedizin Berlin, is working on establishing a virology research unit at the Berlin Institute of Health and is a member of the scientific advisory board of the World Health Summit.

Brain City Berlin: Professor Drosten, how would you describe your field of research?

Professor Drosten: Virology is a very broad field in biology. I work on the medical aspects, i.e. medical virology, which addresses such viral diseases as hepatitis or influenza. My team investigates their evolution and their biological diversity. This is necessary to detect diseases related to new types of viruses - often those that originate from animals and occur in tropical countries. These can sometimes include viruses that threaten the health of entire populations. In recent years, for example, we have been working on the new pathogen from MERS (Middle East Respiratory Syndrome). Our research has proven that this pathogen originates from camels and causes communicable pneumonia, with a certain pandemic risk similar to influenza. We also hope that by using the latest technologies, we will be able to discover viruses that have been present in humans for a long time without the knowledge of the medical community - because these pathogens have so little resemblance to already known viruses. What drives and motivates me is medicine, the diagnosis of rare, sometimes unknown cases. As a doctor, I see patients who might have a diagnosis that a normal lab can't find. I'm currently working on a project in which various viruses in insects are compared with viruses in humans in order to find out whether human diseases can be caused by such viruses.

Brain City Berlin: You have been named head of Charité Global Health, which is currently being organized. What are the aims of this scientific institution?

Professor Drosten: The Charité is big. It supports many research projects and covers many areas of expertise, especially in patient care. These need to be organized and the major players need to talk to one another. The Charité Global Health will not be a research institute in its own right, but rather a platform for coordinating and facilitating communication both internally and externally. Charité Global Health is very interested in bringing together and combining global health research and applications in the Berlin region. We want to connect the Charité as a whole with Berlin's research landscape with an eye beyond the city's borders. There are excellent global health research institutions in Berlin: for example, at the Robert Koch Institute with its own global health program, the Free University of Berlin, which has several interesting departments, the Humboldt University of Berlin, and the Technical University of Berlin. All institutions that have already established their own profiles in the field of global health, a field that has become significant not only (as the term implies) for physicians, but also for social scientists, for engineers, and for scholars in the humanities. The list of disciplines involved in global health is long. Now is the time to get to know each other and find points of crystallization.

Brain City Berlin: The next World Health Summit will take place in October. Can you already say what you hope to gain from the event?

Professor Drosten: The World Health Summit has a long tradition and a very special character. As an international research and health event, the World Health Summit been flying high. It is not a scientific event about a single disease. Instead, topics are addressed here on a higher, big-picture level, in particular, political issues that are very important to the global health sector. When working in global health, political aspects become relevant more quickly than they do in other areas of medical research. This political component and the ability to address policymakers is something that the World Health Summit implements quite uniquely. It is a communication forum that moves at a completely different level.

Brain City Berlin: You came to Berlin from Bonn in 2017. Why did you decide to make this change?

Professor Drosten: There were several reasons for this. The institute in Bonn was very successful. But after ten years, I just wanted to do something new. And, of course, the Charité has a special attraction for every physician in Germany. The Charité is certainly not a place where you rest on your laurels. Instead, it's a place where you can and even must make a difference. This is known throughout Germany, which is why a professorship at the Charité is both a challenge and an honor. But going to Berlin was also a private decision. I grew up on a northern German farm, then studied in Münster and Frankfurt and finally went on to Hamburg. At some point, I realized that living in a big city is the stimulus I need in my life, and Berlin is, of course, the best and undoubtedly most interesting city in Germany. I had to seize the opportunity to go to Berlin. It was exactly the same for my partner. She had lived in Berlin a few years earlier and wanted to go back. So we feel pretty good here.

Professor Drosten: I had previously only ever lived in western Germany, albeit in quite different regions. I was spent many years in Hamburg, Frankfurt, the Rhineland, Dortmund, and the area around Münster. Berlin is equally far away from all these places and yet as a capital city it is very closely connected to everything - this is a very interesting perspective, especially in professional life. I am also interested in Brandenburg and Mecklenburg-Western Pomerania: this rural landscape, which is so unchanged, looks quite different from West Germany. I find that delightful. And then there is the life in the city. We live in Prenzlauer Berg and still have a car that we never use (we'll have to get rid of it soon). Life is different when you're not stuck in traffic, when you cycle to work every day, and still find everything you need. I find the diversity that Berlin offers very attractive. It is something very special and different from the other German cities I know. For example, I know Hamburg and Frankfurt very well and they are beautiful cities. But they lack this character that Berlin has because of its diversity.

Brain City Berlin: What was your previous impression of Berlin's research landscape? How do you compare it with the other locations you have worked at?

Professor Drosten: I know Bonn very well from a professor's perspective. By comparison, Bonn is a small place. This has its advantages and disadvantages. Just like how Berlin also has its advantages and disadvantages. If you work in a small town, you get to know people relatively quickly. You know what resources are available and you how much wiggle room you have. The possibilities here in Berlin, meanwhile, are almost endless. In Berlin, people don't have to adjust themselves to limited possibilities. There's always a partner for anything you want to do. Even the size of Berlin's research landscape is amazing in its own right. It has its own energy. The colleagues, both here at the Charité and at other research institutions, are very accessible and approachable, without any reservations. In Berlin you will encounter many interesting characters that I personally find very likeable. And I'm sure the city has its part to play. At some point, these people decided to go to Berlin. Anyone who went to Berlin in the 90s, for example, was doing research here like a pioneer. I believe this spirit is widespread in Berlin's research landscape. That's what makes it so nice here. In Berlin, there are many researchers who didn't have any cushy chair to slip into when they arrived. Everything needed to be set up and this required a lot of energy, an energy that can still be felt everywhere in Berlin today.