Menu
This website uses cookies. If you continue to use the web site, we assume your consent.
© FU Berlin / Peter Hirnsel

October 10, 2019 | Berlin is a cosmopolitan metropolis. People from more than 190 countries live and work in the city. More and more young, talented people who would like to study here are drawn to Berlin. Meanwhile, Berlin has the highest share of international students across Germany. This is confirmed by the recently published report “Wissenschaft weltoffen 2019” from the German Academic Exchange Service (DAAD).

Around 17 percent of Berlin students are international. Or more specifically: They are foreign citizens and likewise obtained their university entrance qualification abroad. The term for this used by the German authorities is “Bildungsauslaender/innen.” The number 17 (or 16.6 percent) makes Berlin the nationwide leader – ahead of Saxony (13.9 percent) and Brandenburg (13.4 percent)”.

This is confirmed by the recently published report “Wissenschaft weltoffen 2019” from the German Academic Exchange Service (DAAD). A total of 32,000 international students were enrolled at Berlin’s universities for the 2018/19 winter semester. Most come from countries of the European Union, from China, India, the USA, and Russia.

The scientific staff at Berlin’s universities is also markedly international: About 14 percent of the scientific employees in the capital had a foreign passport according to the 2018 DAAD report. This puts the capital in second place in this category nationwide – behind Saarland. 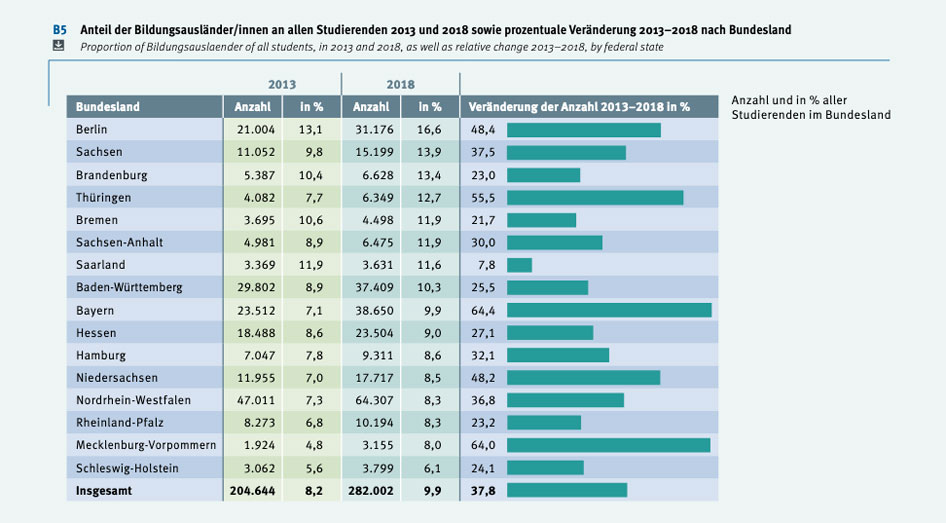 And another top spot went to Berlin: The city’s universities are also leading the funding ranking of the DAAD.  In total, they received 38 million euros from the DAAD in 2018 for exchange scholarships and international cooperation.

Michael Müller is also happy with good performance of the capital in terms of university internationalization: “Brain City Berlin is a place where the world comes together,” says the Governing Mayor of Berlin, who is also a Senator for Science and Research: “Our universities stand for free and open sciences, which know no borders and which deliberately rely on exchange and cooperation with partner institutions on all continents. Thanks to this strong international network, Berlin is also one of the most successful centers of innovation today. This benefits our entire city.” (vdo)