Fair together: gender research and equality at Berlin universities

Berlin has been in the top position among German states when it comes to equality rankings since 2005. What does the Brain City do differently?

Legal frameworks have been created in the capital such as the Berlin University Act (BerlHG) and the State Equal Opportunities Act (LGG). There are also control instruments for universities, such as the general equality standards. Women's and gender research is also firmly anchored at the universities through designated chairs, established research centres, and a host of other measures. And Berlin's equal opportunities programme is the only one of its kind in Germany and promotes equality and the structures to support women's and gender research for the long term.

In addition to the state universities in Berlin, there are a large number of state-recognised private universities and research institutes. Some have also established structures for gender research and policies.

Without the intensive and productive exchange between different stakeholders and initiatives in Berlin, these successes would be inconceivable. This "Berlin Dialogue" has been going on for many years now. A central goal of this dialogue has been the further strengthening of the city's reputation as fair to people of all genders and therefore an academic centre ready for the future.

Taking gender fairness to the next level

With women holding almost 30% of the professorships in the state, Berlin is now the nationwide leader. The proportion of female doctoral students has also risen continuously in recent years to almost 48% in Berlin. Nevertheless, there remains a lot to do to reduce inequalities and the structural disadvantages facing women at universities. 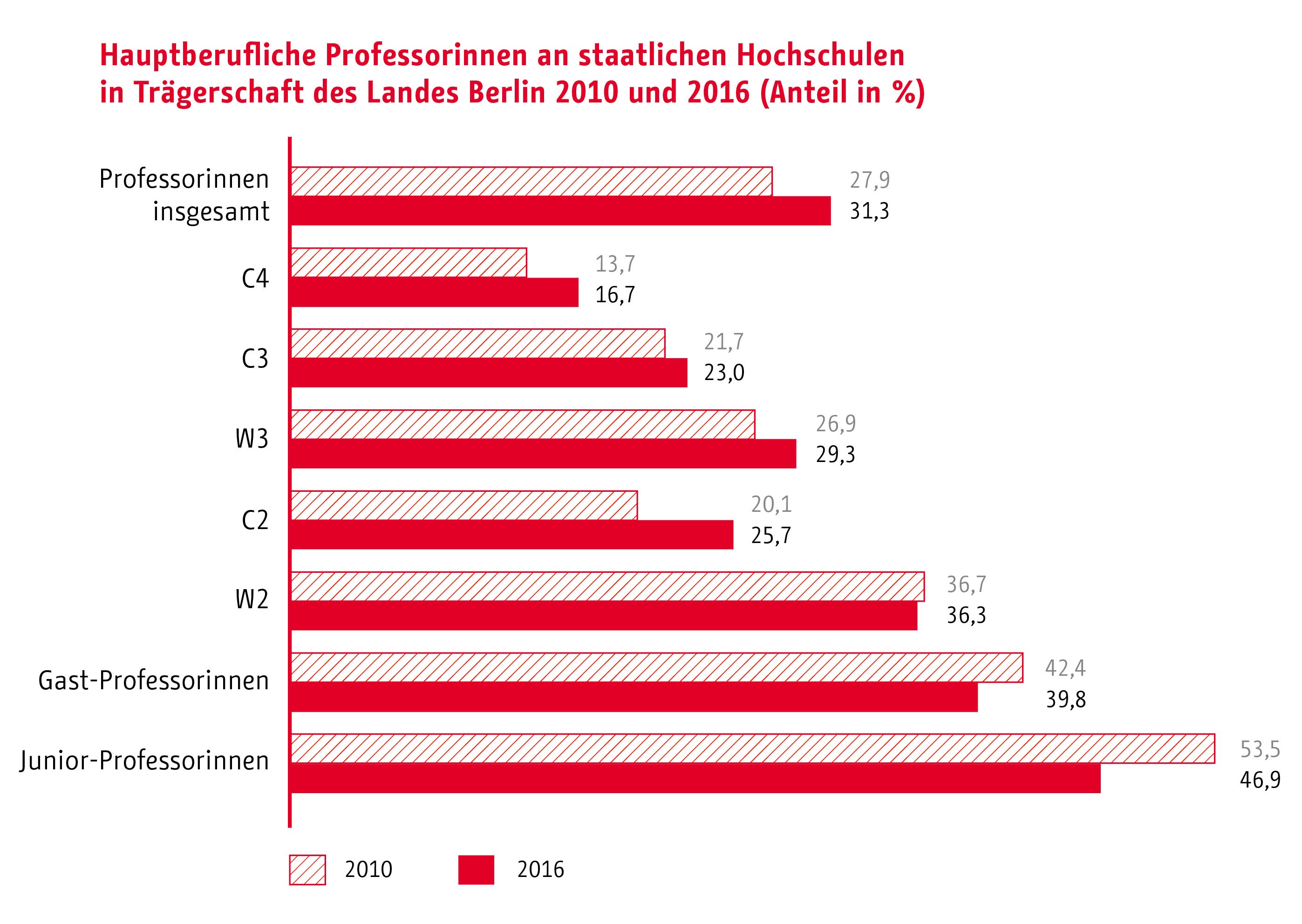 Different stakeholders are engaged in intensive exchanges of ideas about equality at Berlin's universities: the Senate Department for Health, Nursing, and Equal Opportunities, the Senate Department for Science and Research and the Berlin legislature's committee on science and research are all involved. In addition to the State Conference of Rectors and Presidents of Berlin Universities (LKRP), the Berlin State Conference of University Women's Affairs Officers (LaKoF) and the University Women's and Gender Studies Task Force (afg) are other participants.

In the early 1980s, one of the first centres for women's research in Germany was founded at the Freie Universität Berlin. Further centres for women's and gender studies followed at other Berlin universities. In 2000, these centres and networks at the state and religious universities in the city merged to form the University Women's and Gender Studies Task Force (afg). This network connects researchers across universities, promotes exchange and cooperation with the goal of anchoring gender research at universities, and initiates important initiatives for interdisciplinary discussion of current topics in women's and gender studies. The afg office has coordinated the activities of the task force since September 2018.

The central women's representatives of the eleven state and two religious universities and the university hospital in Berlin have collaborated as part of the LakoF since 1991. Their work has a legal basis anchored in the State Equal Opportunities Act (LGG) and the Berlin University Act (BerlHG). Women’s officers advise university management, advocate for fair treatment of all genders by university administrations, represent the interests of women at universities, and are often the first point of contact for cases of discrimination. LaKoF offers the women's representatives a platform to exchange experiences, cooperate, and promote joint political action at the state level.

The Berlin Equal Opportunities Program (BCP) breaks down structural barriers for women and artists and provides targeted financial support for women seeking careers in academia, research, and the arts. One aim of the programme is the long-term improvement of the number of women faculty and in management positions. It is also about helping institutions see gender aspects as an essential element of high-quality research and future-oriented teaching. Numerous measures have been funded since 2001. The programme has a budget of up to €3.8 million each year to fund its work. The BCP is funded by the Senate Department for Science and Research and the Senate Department for Health, Nursing, and Equal Opportunities. The implementation is supported by the BCP office.